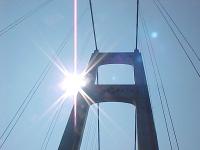 jimbofish hasn't added any friends yet.

Presuming these are the type with two convex discs and a spring (I call them the sewing machine type), there shouldn't be much to go wrong. I used one from an old sewing machine for years on my first wrapper, then made one from hardware store parts bins for my latest wrapper.   I can run three different threads at the same time though one tensioner without problems.

I've never used the Flexcoat wrapper.  Just looking at the pictures in the ads, it looks like the spool goes on the outer spindle, the thread comes around the front of the next one, then around the disks to the sliding eyelet.  I may be wrong in how that one works though.

To my eye it looks like the angle of the thread both to and from the tensioner changes considerably as the thread comes off the spool and as the slider is moved across the wrapper.

On the wrappers I've made, I place an eyelet in line with the tensioner slot so that the thread always enters the discs in the same plane.  On that wrapper, I'd also add another pin or guide immediately after the tensioner.   The aim is to keep the thread feeding through the tensioner consistently so the tension doesn't change.

As for cleaning the discs, rubbing them rapidly on the carpet should polish off any residue and leave them clean and shiny.

I was hoping for something lighter.   Thanks.

Not a recipe, but a couple of sources...

The first is a 'tag' that the OP adds when starting a topic on the second line after the topic title on the 'Start New Topic" screen. Do you usually type something there?  I haven't found any other way to add a tag.

The second is the 'padlock' added by a mod to close a topic to further posting.  It will show a red box saying 'This topic is locked' when viewing the topic in place of the 'Reply to this topic' box.

... or it could be something peculiar to whatever device or program you're using.

Most are on the --- Bamboo rods--- just below the pinned items!!

AFAIK If this were 'locked' no one would be able to reply to it. That doesn't appear to be the case.

Are you referring to the padlock on the far left of the post title, or the 'Tag' symbol after the OP and date?