12 replies to this topic

I'd like to welcome everyone to the newest RBF feature - a bamboo rod taper database! This interactive online taper database will allow members to track and discuss tapers that they enter, as well as providing a useful location for storing and accessing various tapers.

Along with the usual rod information such as length, line weight, number of sections and the taper measurements (based on 5" stations), there is also an option for uploading a picture of the rod and a comments field for any other applicable information. Once a taper has been entered, a stress curve graph is generated using standard Garrison math for hexagonal rods. I'll post the details of the computations if anyone is interested in such things. Taper numbers and the other attached information can be edited by the original user. After you enter a taper, a new topic will be created in the Taper Talk forum with the name of the taper, the stress curve chart and a link to the details page.

As with everything, this is a work in progress, so keep an eye out for changes, and your suggestions for improvements are always welcome.

Thanks to Will, who did the web-programming, and Bob and Ron who's input and and feedback caused this thing to happen.

As usual, please refrain from posting any tapers that are considered proprietary.

Here is another link to the main page:
http://rodbuildingfo...page=taperindex

To enter a taper, simply click the Upload Taper button in the header bar. Enjoy!

It seems like a lot of effort was put into designing this particular database. However, I'll have to plead ignorance of the graphs and ask for directions as how to interpret them.

Is there a publication that would have that info or is it something that can briefly be explained on this topic? Thanks for all the help!

Remember: When you feed the cat, don't lick the spoon!

Basically, stress charts show how flexible, or how much stress is on a particular point on a rod. The higher the point on the graph, the softer, or more stress there is on that point on the rod.

In general, a fast action rod will have a high point at the tip, and then slope downwards toward the butt section (soft tip, stiff butt). Here is the curve for the Dickerson 8013 which is a good example of a faster action rod:

A slow action rod will be softer in the butt section, and will thusly show up as more of a 'U' shaped (soft tip, stiff mid, soft butt), or up-sloping graph (stiff tip, soft butt). These are also often called Parabolic, or semi-parabolic rods. Here is a Paul Young Para 15 that is a good example of a classic 'parabolic' (or semi-parabolic) rod: 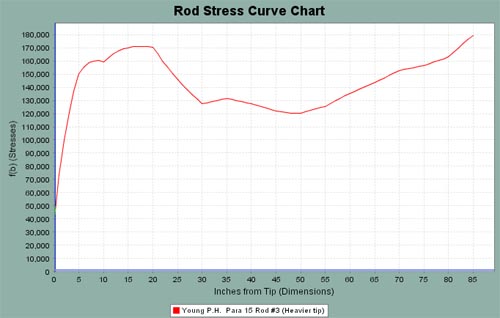 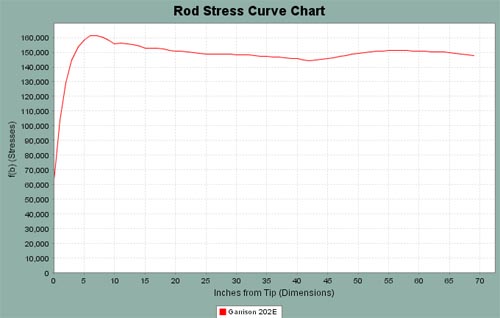 The spikes and dips that you see are, again, relatively softer or stiffer spots on a rod. These will often act as sorts of hinges that, if near the tip, might, as an example, help a rod with short-distance work see the 15" station on the Payne 204: 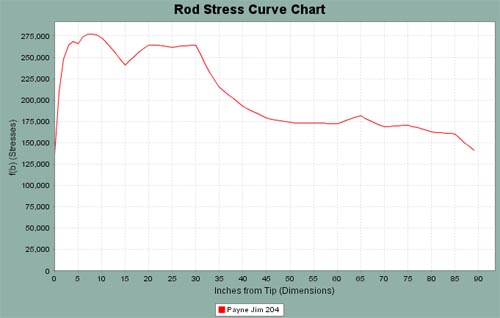 or if near the butt, can assist in roll casting. Check out the 60" station on the Cattanach 7622 as an example: 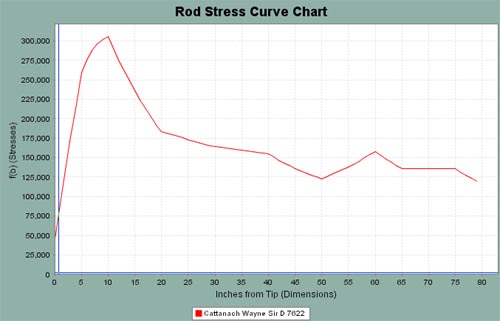 Some of the charts are flat-out wacky, but often will still result in a nice rod. I love the graph for the 'Thomas FE 9'6" 3/2': 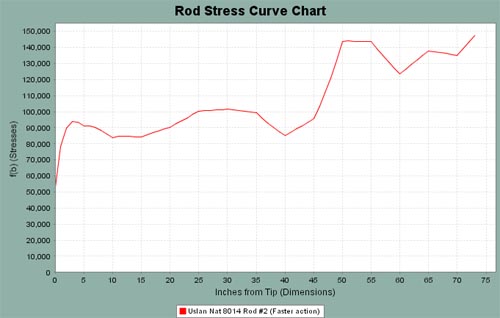 ) explain why two of my favorite tapers, the Payne 97 and the FE Thomas 8', have a similar feel to them: 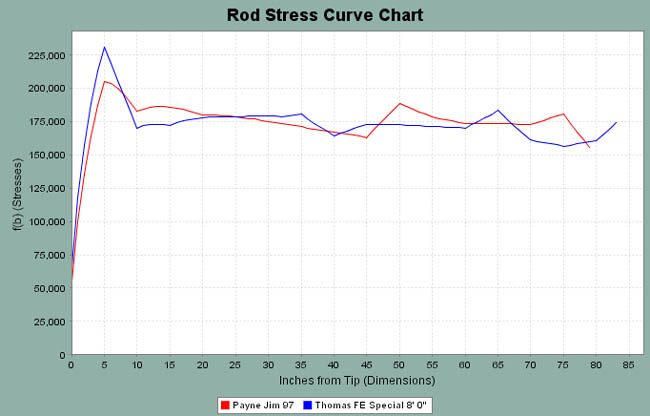 I've put Mark Shamburgs 7642 into my RodDNA database and the stresses in RodDNA are higher then in the taperdatabase chart. Anyone know what assumptions i should make (line cast, LWV, RAV, impact factor, whatever?). I ask this because it seems easy with RodDNA to convert a given curve to another length or line weight.

It is probably the line cast variable Karel. Try lowering it to 30 or 30' and see if that gets it closer. Also lengthen the action length to equal the full rod length. The numbers won't be exact regardless, but they should be resonably close.

A line cast of 35 got the graph reasonably close

I must be ignorant as I cannot open the taper database????

Unfortunately it does not exist anymore

For what it is worth, Garrison style stress curves are meaningless without knowing tip impact. The two go hand in hand.

Unfortunately it does not exist anymore

I think you are right. Neither of the links Chris posted does anything for me.

There was a change of servers, a couple of years back.  Aparently, the taper database didn't survive the migration.  A shame, but we were having a bit of trouble with it before it went away.

HexRod has much of the same information, and many more tapers:  http://www.hexrod.net/

Note, there are 3 different rod taper archives on that site.  Check out all 3.

I bet several people would be willing to retranscribe/reformat the data if it still exists. Does the database exist at all (inaccessable or otherwise)? Even quasi-unintelligible data would probably be helpful.

you can find the old taper data base here: http://web.archive.o...aperindex&id=82

You can only be lost if you care where your going. - Harvey Morrison

Back to Taper Talk